I had the chance of visiting Basilique Saint-Martin- a beautiful cathedral dedicated to one of the most outstanding figures of the history of Tours. Saint Martin was the second bishop of the city during the medieval time. It was a dreadful cold day in the city when he gave his coat to a naked beggar. “This incident and the importance of Martin in the medieval Christian West made Tours, and its position on the route of pilgrimage to Santiago de Compostela, a major center during the Middle Ages” (wikipedia).
It is a story of kindness and true sacrifice. I truly think Saint Martin’s story stands the test of time even though we are living where the art of kindness and chivalry is rarely spoken.

I say this, because of an experience I had on my way to Tours. I was perplexed, jet-lagged, and miserable as I sat on the floor of the train, unable to climb over the pile of luggage to make it to the second floor where my seat was waiting for me. Suitcases were everywhere, even blocking the entrance of each coach. For the first time, it dawned on me, I was hundreds of miles away from home, in a foreign land. To make matters worse, I questioned if I was even on the right train. As I sat on the stairs, looking quite pitiful, she noticed me and asked where I was going. I showed her my ticket and expressed my confusion as to why I had to switch to another train to make it to my location. It was as if, a host of angels were looking out for me. It was then, I experienced my first miracle. We were going to the same city! She spoke English and she was so excited to meet an American, so that she could practice her English. “Let’s be traveling companions and I will help you,” she said. She helped me with my suitcases and was the perfect traveling companion. She became my very first friend in Tours. 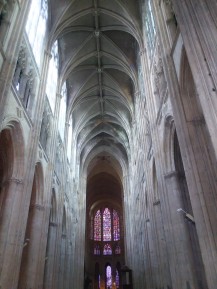 Getting to Tours was an adventure of its own and we had at least five delays. We were supposed to arrive at 2pm, but we didn’t get to our destination until 6pm. I looked at my new friend and said, “If I call TGV and complain, would they reimburse me?” She said, “You could, but they will say you are lucky we provided you with a train to get you to Tours.” At that moment I realized, I was no longer in the United States. Nevertheless, I learned that kindness still reigns in the heart of the people of Tours. Saint Martin truly had a tremendous impact on the city and his influence lives on.